Benefits
How it Works 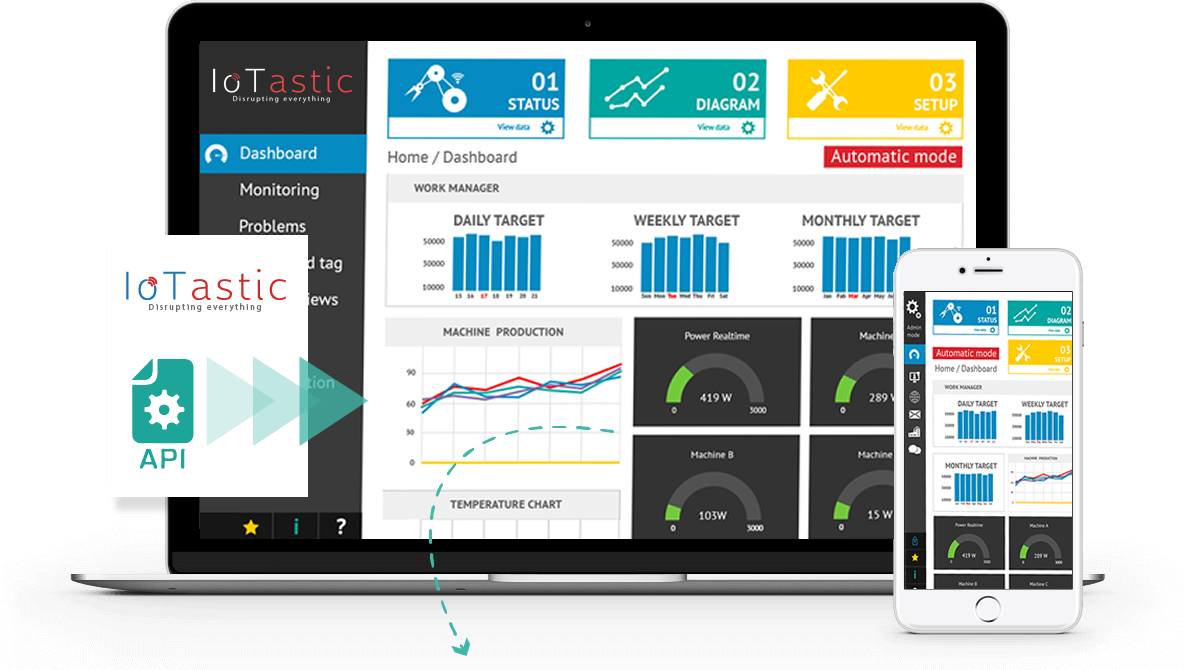 How does this work?

Don’t reinvent the wheel! We already have put tremendous effort to develop an efficient, reliable and flexible IoT engine just for you. Use IoTastic API and focus on solving your core business problem by using your preferred programming tools and technologies.

We developed IoTastic so that you should only be focusing on making innovative solutions than dealing with complexities of IoT world.

You can collect and analyze sensor data, which can be used in automating decision making through our scenario composing functionality.

How does the solution work? 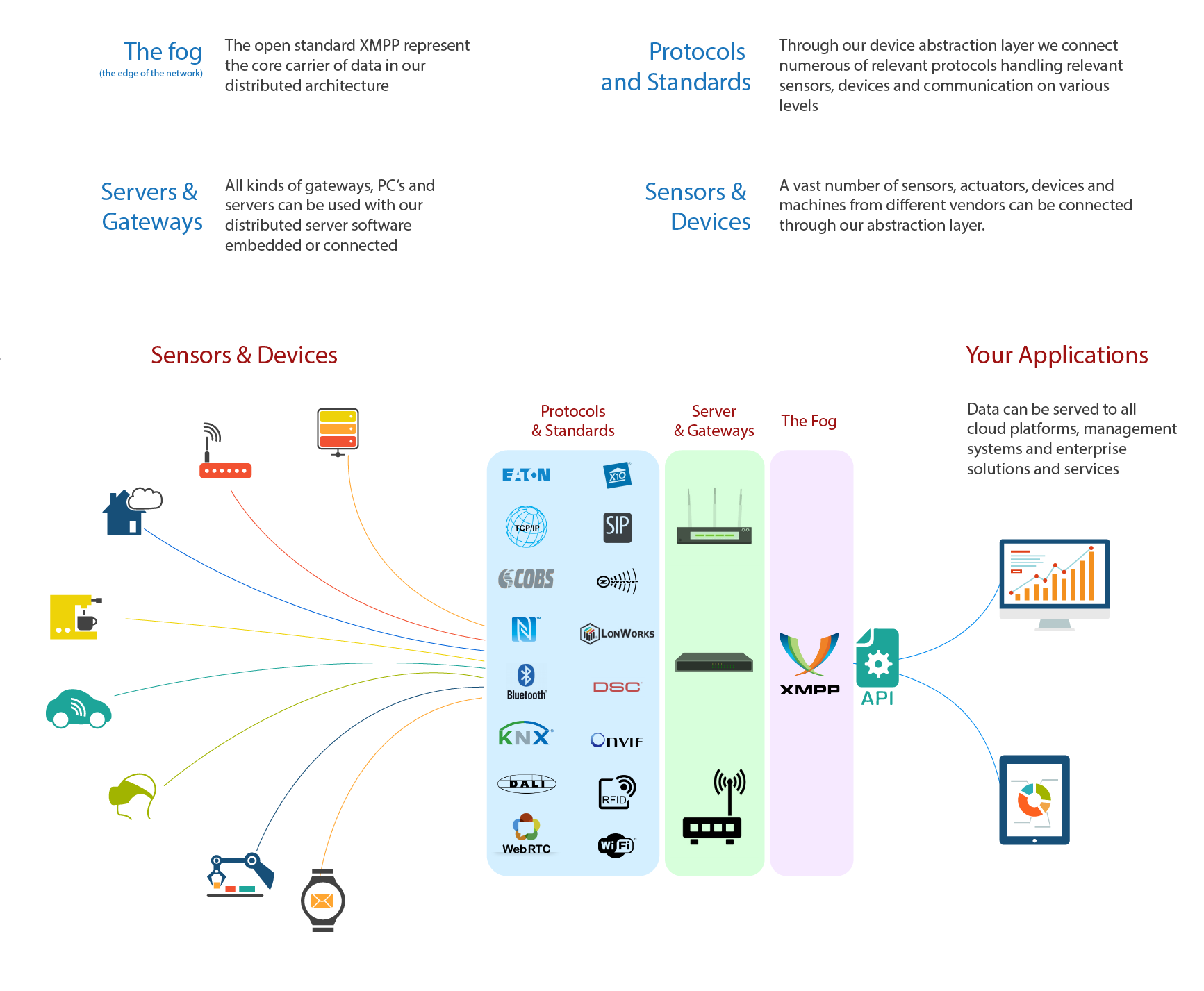 Easy definition of citizen driven Services & Functions by use of a common interoperable  Functional Mapping (IoT Templates) of different networking devices from different and competing technologies !

Looking for a turnkey IoT solution for your business?

We in addition to IoTastic platform, provide consulting and software development services. If you are looking for a partner who can develop your complete IoT based solution, then you are at the right spot! We are just a call away!

The IoTastic™ integration platform had its first top level healthcare application portal solution developed by IT&Integration AS (ITI) in cooperation with Caretech AS (now bought by OneCo AS). This was done through a innovation project in Arena Health innovation (Vitensenteret helse og teknologi) at the University of South-Eastern Norway(USN) in Drammen Norway.
First pilot was installed late 2012 in a new built condominium for people with dementia in the municipality of Drammen in Norway, and is still considered as the most advanced installation in Scandinavia.
(ROI in 123 days!   First year savings 3.5 mill NOK => Saving 200.000 NOK on each resident)

ITI has now upgraded their IoTastic system to a cloud based solution branded as IoTastic digital Response Center portal. IoTastic integration platform is now running with success in both public and private healthcare institutions & homes in Scandinavia. In one of our biggest healthcare installations we do handle more than 100 flats with individual adapted service scenarios as illustrated in our IoTastic Home Care Pamplet.

Velferdsfabrikken AS is making a solution based on the IoTastic integration platform named “Televenn” which is a more advanced homecare service with aim to replace today’s analog safety homecare alarm button which is currently being used in most of the municipalities in Norway. We are proud that Velferdsfabrikken have chosen IoTastic integration platform to build their solution now also introduced in the UK healthcare market.

ITI is now in cooperation with Fine Forest Food AS planning an IoTastic Farming solution available 4. quater of 2020. Some pilots has been tested for surveilence and handling grain dryers.

Smart Grid is an electrical grid (interconnected network) that uses computers and electronic BUS-devices (nodes) to gather and act on information, such as information about the behaviors of suppliers and consumers, in an automated fashion to improve the Efficiency, Reliability, Economics, and Sustainability of the production and distribution of electricity. Crucial here is the needed two-way communication with Smart Meters AMR (Automated Meter Reading) in “open” AMS (Advanced Metering Systems) solutions in the new paradigm shift with  IoT technologies and services. ITI is now planning starting up theis VSG project and are searching potensial partners.

We have delivered the total solution with infrastructure and IoT to Oslo Skytesenter and previous Health studios.

We have also developed several Apps for membership subscription that makes you able through GPS position to access IoTastic controlled environments.

Founder of IT&Integration AS (IoTastic AS) and EPR-forum (tGov) along with its e-University (eSam). Has his M.Sc. in Engineering Cybernetics (NTNU) and Business Economist (BI University, Norwegian School of Management). More than 30 years experience. Click here to see the IoTastic background history in a Prezi-presentation.

Specialist in system integration and engineering. Act as project manager of our installers and handling our development teams both SW and HW. Educated and practiced as telecom installer and autodidact within computer science and networking. Life long experience with ambient control.

Senior systems- and development engineer with 25 years of experience from telecom and satellite communication infrastructure for maritime, land, and airborne communication via the Inmarsat satellite network.

Are you a startup?

Have an innovative idea and need a partner to develop MVP, or you already have tested the idea in market and now want it fully developed, then don’t go any further! We are seasoned entrepreneurs and would love to help you on your way towards success. Remember, we are just a call away!

How to get in touch with us?